The aim of the Pegwell & District Association is to preserve the natural environment and to protect Ramsgate’s Western Undercliff and Pegwell Bay from further development.

We are fortunate to have inherited the benefits of a south-facing beach with safe bathing and a beautiful unspoiled expanse of coastline where large flocks of waders and seabirds gather and feed. There are few more inspiring sights that a winter sunset over Pegwell Bay. It has been the source of inspiration for poets, writers and artists throughout the centuries.

Walk this shore and you are treading in the footsteps of the Romans, the Saxons and the Vikings. Saint Augustine landed nearby as did Hengist and Horsa. It is one of the last open spaces in Thanet where you can walk in peace and commune with nature. Some would have us believe that concrete, tarmac and buildings are preferable to cliffs, sand and shore.

If you would like to try and help save the freedom and beauty of Pegwell Bay, please consider joining the Pegwell & District Association now. Subscriptions are urgently needed to build up a fighting fund to protect our heritage. Overseas members are very welcome, but the cost of postage would prevent us mailing the Newsletter each month. It is published on the Internet every month as soon as printed copies have been delivered to local members, so you would still be able to keep in contact.

Pegwell Bay is a shallow inlet in the English Channel coast at the estuary of the River Stour between Ramsgate and Sandwich in Kent. Situated in the bay is a large nature reserve, known for its migrating waders and wildfowl, with a complete series of seashore habitats including extensive mudflats and salt marsh. The public can access this nature reserve via Pegwell Bay Country Park, which is located off the A256 Ramsgate to Dover road.

Pegwell Bay in 1858 is recorded in a much-reproduced landscape painting by William Dyce, now in the Tate Gallery: Pegwell Bay, Kent – a Recollection of October 5th 1858. 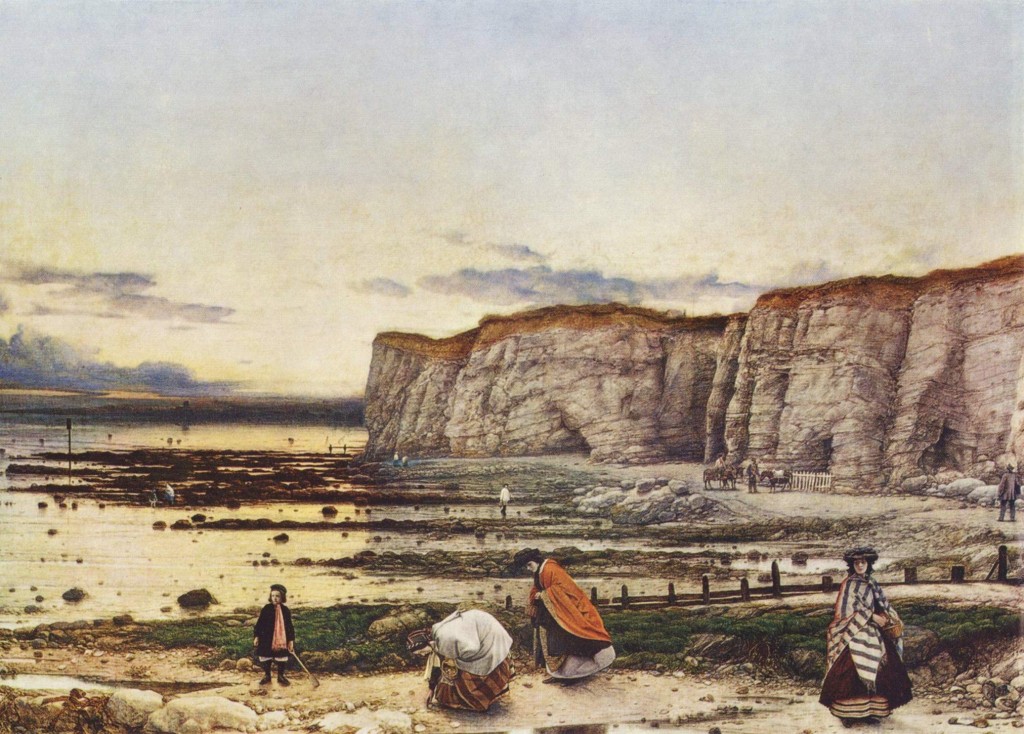 In the 19th Century a pleasure pier was built in an effort to establish a seaside resort to rival nearby Ramsgate. This was not a success however, and was dismantled before the end of the century.

A full-size replica Viking longboat complete with shields is situated by the main road on the low clifftops above Pegwell Bay to commemorate the first Viking landings in England hereabouts.

The Viking ship replica, named Hugin, sailed from Denmark to Thanet in 1949 to celebrate the 1,500th anniversary of the invasion of Britain, the traditional landing of Hengist and Horsa and the bethrothal of Hengist’s daughter, Rowena, to King Vortigern of Kent. Out of 53 crewmen only the navigator, Peter Jensen, was a professional seaman. Viking conditions were faithfully observed and the only instrument carried was a sextant. The Hugin was offered as a gift to Ramsgate and Broadstairs by the Daily Mail in order to be preserved for centuries. The ship underwent extensive restoration in 2004–5.

Additionally at nearby Ebbsfleet are the sites of the first landings in England of the Saxons in 449 AD and of the first Christian missionary, St. Augustine, in 597 AD.
At the north east corner of the bay are the remains of Hoverlloyd’s cross-channel hoverport. Vehicle and passenger carrying hovercraft were operated here from 1969 until 1982.

Pegwell & District Association is pleased to announce the appointment of Richard Kinzler from Pegwell Bay as the new Chairman following his election at the Associations A.G.M. in Ramsgate, Kent, Thursday 18th October 2012.

American-born Richard Kinzler, whose profession is in the orthopaedic industry as an Orthopaedic Specialist, said:  I moved to the area in the late 70s and have a passion for Pegwell, from Natural History to its fascinating History. I am delighted to join the Pegwell & District Association Board of Trustees as Chairman dedicated to protecting Ramsgate’s Western Undercliff & Pegwell Bay’s natural environment for everyone to enjoy.

In his spare time, Richard’s interests have focused on wildlife conservation. He took a sabbatical as a Biodiversity Warden for Sandwich & Pegwell Bay Nature Reserve in 2009 but, since 2006, has been performing a variety of volunteering roles for the Trust such as environmental management, field research. He joined the Board of Trustees for Kent Wildlife Trust in 2012. 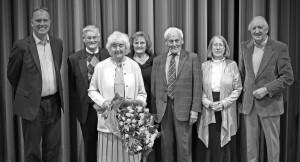 The Pegwell and District Association began with a meeting of worried residents in the garden of “Driftwood” in 1987 and has continued ever since, intimately drawn and held together by Eileen Randall’s passion for the good of our neighbourhood and against unsuitable development in our unique environment.

Mention ‘Pegwell’ in Eileen’s absence and you think immediately of Eileen. Speak of the neighbourhood in her presence and she will tell you about anything that isn’t going quite right and her ideas for helping put it right.

The major threat that brought us together in the first place was a plan to build a railway across the Bay, with a marshalling yard, to access an ambitiously conceived Sallyport at Ramsgate Harbour for cross-Channel traffic. The railway would have crossed the fields from a junction with the present line and broken through the cliffs in a cutting where the Pegwell Hotel looks over its gardens to the shore. Truly a ‘Big Bang’ – which did not come to anything, but woke us to the need to be ever-vigilant and wary of developers.

The cliffs and sea-shore are invaluable and the rural quality of the ‘Village Separation Zone’ between us and Cliffsend to be fought for against any threats.
History will relate how campaigning brought about compromises which resulted in the building of the tunnel under Pegwell for a road for freight lorries along the Western Undercliff.

Into less contentious times, and the Association has held together with the membership encouraged by the regular programme of social events.
Driftwood has been our base for Eileen’s major part in correspondence and the Newsletter. Derek – bless him! – has been the printer and folder of the pages and overseen distribution.

Our Committee has never met anywhere else! – and probably at about half all our coffee and tea parties’ members and guests have been welcomed by the gracious lady herself there.

No one could count the number of cakes, pies and jars of jam and marmalade she has got ready to sell.

Weeks away together as a group and coach outings for a day have been brain-children of Eileen’s with a tremendous amount of planning and organising needed to make them suit as many as possible.

Can we thank her enough?

We must not begrudge her wish to step back from the major part she has taken in all these activities – but it goes without saying that she will be sadly missed.   Her health – and Derek’s – have not been one hundred percent lately and, of course we wish them well in that respect. 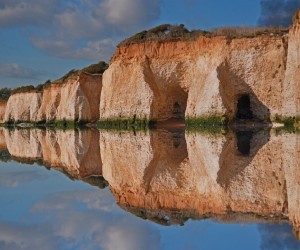 Subscriptions from only £7.00 per year

Warning: require_once(OAuth.php): failed to open stream: No such file or directory in twitteroauth/twitteroauth.php on line 10